Myrrh is a natural exudate or gum resin collected from Commiphora trees that inhabit the Horn of Africa and the Arabian peninsula. 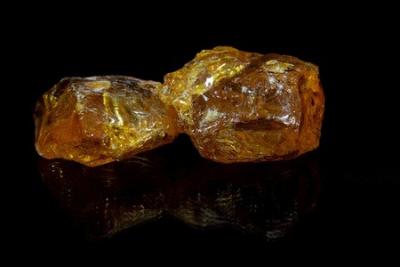 The Commiphora genus is a vast species of small, shrubby trees with thorny, knotted branches that yield scant leaves and small white flowers.

The trees are distributed through the dry, arid lands of the Arabian peninsula and Red Sea region, indigenous to the mountain slopes of Northern Somalia, Ethiopia, Kenya, Yemen, Oman and Saudi Arabia. The trees grow in the wild in open Acacia- Commiphora bushland, primarily over limestone and thriving in shallow soils.

Myrrh is derived from the Arabic and Hebrew word "murr", which means "bitter", reflecting its bitter and astringent taste. 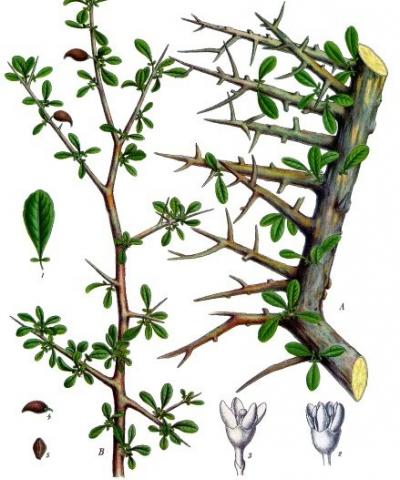 True myrrh, also known as bitter or heerabol myrrh is sourced from the Commiphora myrrha species. Another species C.gileadensis or opobalsamum produces the biblical Balm of Gilead resin. Opoponax or sweet myrrh comes from the C.erythraea type. There is also a Commiphora species C.wightii (Guggul) that grows in India, Pakistan and Bangladesh that yields Indian bdellium gum resin.

Through small ducts in the bark of the tree, a gum resin containing an essential oil called an oleo-gum resin is released, becoming sticky and resinous when exposed to air. 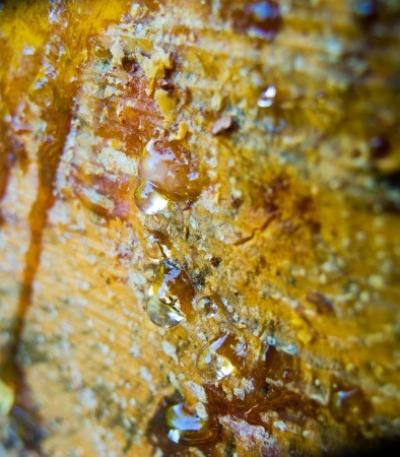 Myrrh has played a key role in the religious, cultural and medicinal life of man through the eons; one of the first scents used in prayer and perfumery, a traditional ingredient of incense, one of the gifts of the Magi to the baby Jesus.

The most familiar form of the myth of the legendary Myrrha is related in Metamorphoses by the Roman poet Ovid. The story tells us Myrrha falls in love with her father Cinyras, the King of Cyprus, as a result of a curse placed upon her by a jealous Aphrodite, the goddess of love. She does not realise the paternal relationship and is chased by her father across Arabia once he learns of her identity, threatening to kill her. The gods take pity on Myrrha and transform her into a tree, the aromatic exudate of the myrrh tree formed from her tears, the so called "tears of myrrh", used in festal incense offerings sacred to Aphrodite. Whilst in the form of a tree, Myrrha gives birth to Adonis, whose name came to signify both lover and perfume. 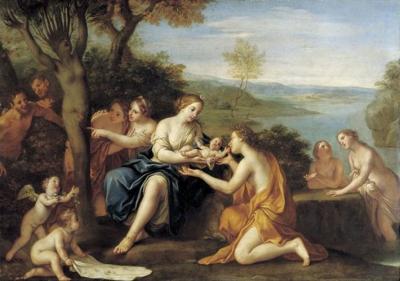 Myrrh, along with frankincense, were some of the precious aromatic raw materials traded in ancient times from the Dhofar region (now modern Oman) and Yemen, following routes along the Red Sea coast and eventually reaching Jerusalem,Egypt and beyond. Myrrh was collected from at least six different Commiphora species growing through Southern Arabia to North East Africa and India. It is believed that C. gileadensis and C. erythraea were probably the main myrrh species used during classical times. 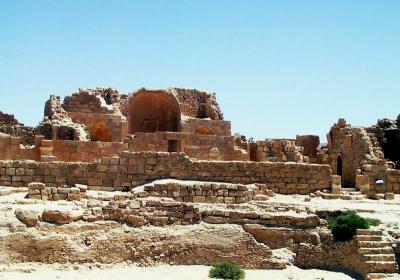 Myrrh was imported by the Ancient Egyptians from around 3000 BCE. The highly fragrant and antiseptic resin was used in embalming, for glueing sarcophagi together, burnt for religious sacrifice and applied in treating wounds. The Egyptians referred to myrrh as "bal", implying a sweeping out of impurities. 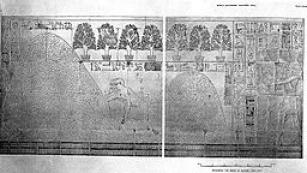 Myrrh was a prominent component of kyphi incense and added its mysterious aroma to "Susinum" perfume and the renowned "Stakte" - a strongly scented liquid myrrh mixed with balanos oil.

Egypt's first female pharaoh, Queen Hatshepsut sent an exploratory trading expedition to Punt(as the Horn of Africa was then known) which facilitated the transportation of live myrrh trees to Egypt. This event was so portentous that it was recorded for posterity on the stones of Hatshepsut's mortuary temple in the Valley of the Kings. 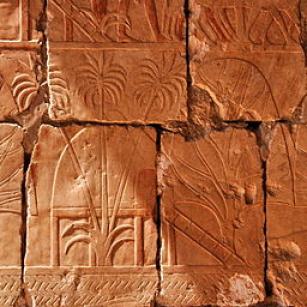 The Ancient Hebrews used myrrh in the holy Ketoret incense. Myrrh is mentioned in Solomon's Song of Songs which celebrates the sensory pleasures of spices and resins such as myrrh and frankincense, combining both sanctity and sensory excitement.

Frankincense and myrrh tears are still regarded as important incense ingredients to this day, the twirling smoke of burning incense still captivating and enchanting us with its aroma, form and movement. 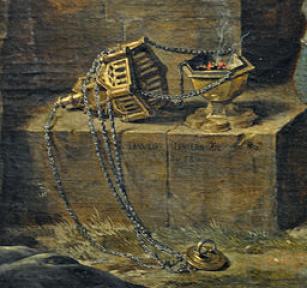 In Ancient Greece myrrh was held in high esteem for both its medicinal and perfuming properties, employed in the manufacture of antiseptic and healing balms and perfumes. Burning myrrh incense concealed the odour of burning flesh and purified the air during cremations.

Alexander the Great's army used myrrh mixed with spikenard to fragrance their tent coverings and bedding.

The Greek historian Diodorus Siculus wrote in the first century BC that "all of Arabia exudes a most delicate fragrance; even the seamen passing by Arabia can smell the strong fragrance that gives health and vigour." 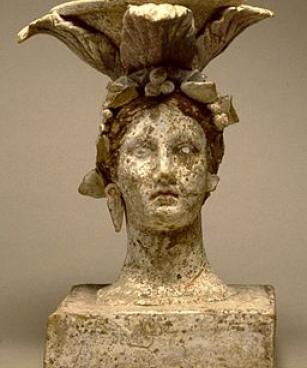 The Ancient Romans made similar use of myrrh in their daily life. Myrrh, as the natural historian Pliny instructs us, gave greater consistency and additional sweetness to ointments either for medicinal or perfuming use.

The resin was used in the therapeutic perfume oil "Mendesium" for aching muscles, "Metopion", an almond oil lotion for dry skin and "Murra", an all purpose perfume, hair tonic and skin cleanser.

At one point in time, myrrh was priced at five times higher than frankincense. Myrrh also had a function in fumigating wine jars before bottling and as a narcotic and consciousness elevating flavouring for wine. 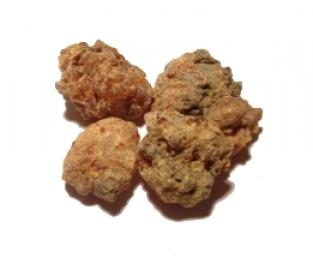 Myrrh was not only present at the birth of Christ in the form of an offering from the Three Wise Men but came to symbolise his suffering and death. This lead to the custom of anointing Christian martyrs with myrrh before their burial and is reflected in its use in the preparation of Holy Myrrhon and Chrism anointing oils in the Christian faith today. 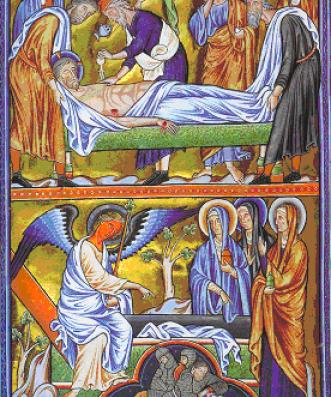 In traditional medicine, either as a tincture or oil, it has applications as an antiseptic, analgesic and anti inflammatory in oral and skin ailments.

Traditional Chinese Medicine (TCM) uses myrrh as a compliment to frankincense and as a drying and astringent agent.

Aromatherapy practice utilises myrrh in respiratory and urinary conditions and for skin and wound healing.

Myrrh's bitter qualities are put to use in the Italian herbal liqueur and digestif Fernet Branca. 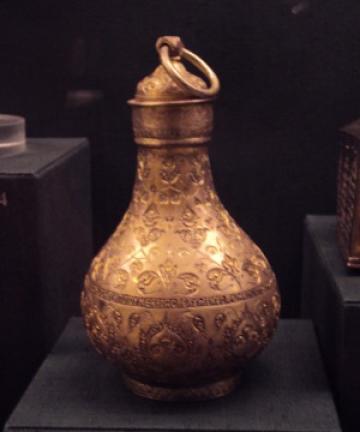 Major producers of myrrh resin are the countries in the Horn of Africa, chiefly the northern territory of Somalia, the Tigray region of Ethiopia and more recently a small industry has developed in Kenya.

Myrrh is harvested in a similar way to frankincense throughout the year. Incisions are made on the trunk and branches with a special tool and the oozing exudate from the resin ducts forms agglomerates or tears which is left to harden on the side of the tree for a few weeks.

There are two variants of resin - heerabol, that forms rough, reddish-brown tears and bisabol, that is softer and dark yellow.

Traditional collection of myrrh resin makes a distinction based on how it is produced - resin that naturally accumulates and exudes after a good rainfall is considered better quality compared to a resin harvested after scarification of the bark.

Resin tears are cleansed after harvesting and sent to distilling centres in countries such as Spain, France and the US for essential oil distillation. 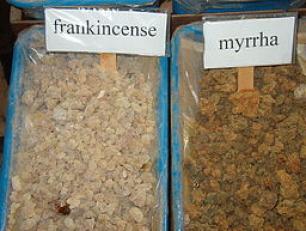 Hydro distilled myrrh essential oil has a small yield of around six to eight percent of the oleo - gum resin.

The essential oil is liquid when freshly distilled but transforms into a stickier and more resin-like form when exposed to air. Variability in the quality and character of myrrh gum and subsequent essential oil produced is dependent on the botanical diversity and geographical location of the Commiphora species. 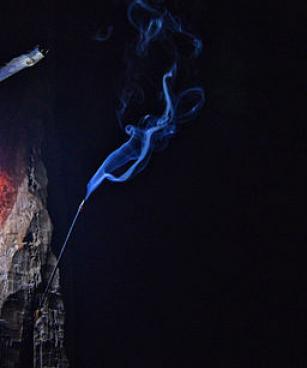 The aroma of Commiphora myrrha or true myrrh is deep, lingering and quite singular. It has been described as sharp, spicy, resinous, bitter, medicinal, smoky, faintly balsamic or vanilla-like with a latex-like quality and elements of black licorice and mushroom.

Myrrh acts as a base note in a composition, adding projection, longevity and a haunting, time-honoured character to a blend.

The resinous aspects of myrrh pair particularly well with woody or coniferous essential oils. Use it carefully in a blend as it can overpower and smother other essential oils.

An aged oil loses some of the medicinal element, eventually becoming mellower and smoother. 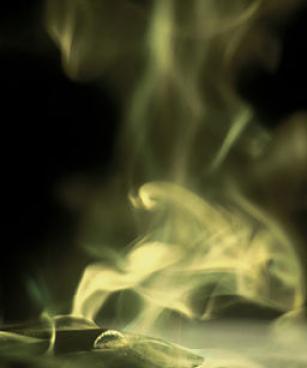 Compare true myrrh essential oil to Commiphora erythraea, opoponax or sweet myrrh. This essential oil is mainly used in perfumery and is less medicinal, sweeter and more balsamic. A semi- solid resinoid of C.myrrha is ethanol extracted from the oleoresin, which also is less medicated, smoother and warmer than the essential oil. 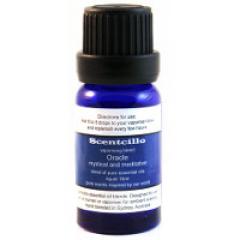 Myrrh essential oil features in the Scentcillo Oracle essential oil blend with other devotional scents such as frankincense and cedarwood Atlas.

Oracle is an aromatic invocation of the divine rituals of the Pythia, priestess of Apollo at the Oracle of Delphi, linking the physical with the spiritual realm. 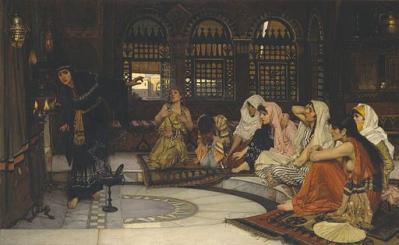 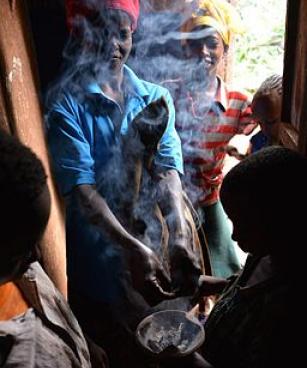