Sandalwood - the lingering fragrance of the 'subtle body'

The slow growing sandalwood trees have been sought after for centuries for their long lasting fragrant woods, producing a rich, creamy scent that is highly distinctive.

The evergreen Santalum tree is a native of Asia, Australia and the Pacific Islands, having a pale yellow trunk with a fine grain. It was once referred to as botanical ivory as the wood was used for crafting carved objects. The dark inner heartwood of the entire trunk and branches of trees that are around 30 years old are harvested to produce its precious essential oil by a four step distillation process.

Indian sandalwood (Santalum album) indigenous to South India's Mysore region is famed for its high quality. A high santalol (terpenoid alcohol) content is considered a standard of quality for the essential oil. It has a long history of use in perfumery and cosmetics. in the early 20th century sandalwood had applications in the pharmaceutical industry as a treatment for urinary tract infections. Sandalwood is a useful oil for dry, dehydrated or ageing skin and as a mild astringent it also has benefits in oily skin conditions.

Sandalwood is described as having a sweet, warm aroma with a fresh top note that provides an enduring woody base note and is an excellent fixative when used in fragrancing. Although regulated by the government, natural Indian sandalwood has sadly become an endangered species due to issues such as scarcity, illegal poaching and difficulty in propagation that is reflected in the escalating price of the essential oil. 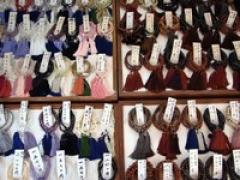 Sandalwood, deriving from the Sanskrit Chandana meaning honouring or praising is considered an aromatic cornerstone of Buddhist practice and in its powdered form is a key ingredient of incense. It is a sacred integral to ritual and ceremonies in many Asian cultures, bringing one closer to the divine. It has been described as the fragrance of the subtle body, that is, the centre of the highest insight and enlightenment. Buddhist mala or prayer beads are often composed of sandalwood and consist of 108 beads based on a formula which includes the number 6, which represents the six senses of a human being- sight, sound , smell, taste, touch and thought.

Santalum has a calming, harmonising effect, soothing tension and irritability and facilitating spiritual practice- a widely used oil in meditation.

It is assigned to the root chakra which governs fertility and sexuality and has long been considered to have aphrodisiac qualities. Aromatherapist Suzanne Fischer-Rizzi describes it as fostering openness, warmth and understanding. 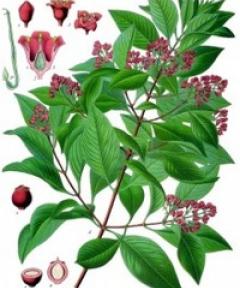 The Australian sandalwood tree (Santalum spicatum) is grown commercially in Western Australia and its essential oil is used extensively by aromatherapists and perfumers. The oil is usually described as having a more pungent aroma, sharper in its dryness. Current research has found that Australian sandalwood has beneficial anti microbial and anti inflammatory properties due to the unique chemical components EE farnesol and epi- alpha- bisabolol.

Steps have been taken to conserve the sandalwood species in Western Australia and to protect the environment through conservation and regeneration programs. Indigenous communities are also involved in the harvesting of sandalwood and supported with commercial partnerships through the Songman Circle of Wisdom.

To make a simple sandalwood perfume mix a few drops of sandalwood essential oil in a lip balm sized pot of shea butter and use on pulse points.

For a little sensory gastronomic indulgence Food Yoga has a recipe for perfumed sandalwood crush here.

If you'd like to know more about the Australian sandalwood industry: 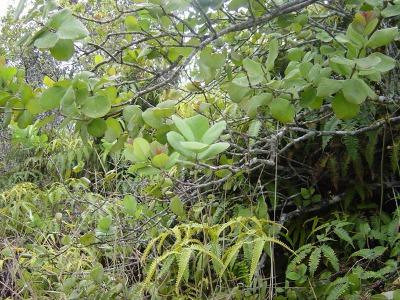